This report here is part of Part 6 of the “Project to Restore Moody Bible Institute to its Roots and Foundation”. This sixth part looks at several leaders and seeks to inform Moody family, alumni, faculty, donors and prayer partners and to warn them about leaders who have an allegiance to Jesuit schools and who are working against the Bible and covering up scandals and corruption. If you missed the previous parts, you can find them here: www.RestoreMBI.com/web.htm

Loyola University of Chicago is #9 on a major list of top Vatican/Jesuit colleges in the United States.

It was started in 1870 as St. Ignatius College, in honor of the top satanic-Jesuit founder of the secret society and club of the Illuminati. It may look small, but graduates from this and other top Jesuit colleges easily work themselves into top positions to control and turn a nation. Don’t let your eyes fool you – it’s evil. Some may go there naively, but some who graduate from here are among satan’s favorite human-agents and leaders on earth to promote and advance (by hook or crook) satan’s one-world government, along with the Rockefeller’s UN (United Nations) and the Vatican, and the “royalties” of Europe - the evil royal elite of Britain, France, Germany Spain, and Italy.

If you want to catch up on the real history of the Jesuits and their motivation, all you have to do is start with their oath – it’s a secret blood oath to the pope to destroy anything necessary to get and keep world-domination for the Vatican, while keeping their allegiance an absolute secret – which 95% of them do just that. Here’s just a clip from that oath.

“… I furthermore promise and declare that I will, when opportunity presents, make and wage relentless war, secretly or openly, against all heretics, Protestants and Liberals, as I am directed to do, to extirpate and exterminate them from the face of the whole earth; and that I will spare neither age, sex or condition; and that I will hang, waste, boil, flay, strangle and bury alive these infamous heretics, rip up the stomachs and wombs of their women and crush their infants' heads against the walls, in order to annihilate forever their execrable race. That when the same cannot be done openly, I will secretly use the poisoned cup, the strangulating cord, the steel of the poniard or the leaden bullet, regardless of the honor, rank, dignity, or authority of the person or persons, whatever may be their condition in life, either public or private, as I at any time may be directed so to do by any agent of the Pope or Superior of the Brotherhood of the Holy Faith, of the Society of Jesus.

"In confirmation of which, I hereby dedicate my life, my soul and all my corporal powers, and with this dagger which I now receive, I will subscribe my name written in my own blood, in testimony thereof; and should I prove false or weaken in my determination, may my brethren and fellow soldiers of the Militia of the Pope cut off my hands and my feet, and my throat from ear to ear, my belly opened and sulphur burned therein, with all the punishment that can be inflicted upon me on earth and my soul be tortured by demons in an eternal hell forever!...”

One of my favorite resources to help honest Christians catch up on the ultra-devious group and their projects, is to show  them the resources of Jack Chick, a cartoon series called the Alberto Rivera series.

--- Key highlights include the idolatry systems of praying to saints, worshipping the pope as though he’s “Jesus” on earth, and the lies of the eucharist and “exorcism” (using satanic rituals to pretend to cast out demons in Jesus’ Name). Also included is the history on Islam that I’ve been able to prove myself: the Vatican started Islam as their other secret satanic army (besides the Jesuits) to murder, steal and cause chaos, and then the Vatican can come in with their one-world false religion and conquer the area, presumably in the Name of “Christ”. This series also explains more about the Jesuits.

Moody Bible Institute (MBI) is under attack from the devil to destroy it. Moody has been an honorable source of Bible teaching, and yet look at how many Jesuit-trained leaders MBI has and has had for years. The Jesuit-trained leaders have been infiltrating and are the evidence and activities right now shows that they are working together to shut down or take over Moody, which is why we are speaking up. If they can finish ruining the finances, they (Loyola or whoever) can buy the building for cheap. You can help stop that – and that’s why we are writing this. First, let’s look at who’s on the Jesuit team.

Got a 3-year degree from Loyola University of Chicago for business, while working for Jerry B. Jenkins as Moody Press advertiser.

Got a Doctorate of Philosophy (PhD) from Loyola University of Chicago

Got a Doctorate of Philosophy (PhD) from Loyola University of Chicago

> Christopher Denison, on the MBI board of trustees

> Mark Wagner, assistant secretary of MBI and on the board of trustees, former VP of operations of Walgreens

Got an degree from Wharton School at University of Pennsylvania, now serves on the UPenn. Industry Advisory Board as well as his job at Moody. Wharton School of Business is an admitted Jesuit-run business school.

Got a Doctorate in Philosophy (PhD) from Loyola University of Chicago
* https://www.moody.edu/academics/faculty/milco-michael/

Then we have the legal counsel for MBI – Bransfield and Bransfield, who served as the legal counsel from 1966 to 1996, and then again from 2007 to 2009. The family who runs this firm appear to be 100% trained at Jesuit universities. Most have some training at Loyola, and the rest have training at other slightly hidden universities who have close ties with Jesuits (Notre Dame and DePaul University.

“MARVIN E. BECKMAN graduated from University of Washington in 1953 with a degree in Political Science. Marvin served his country as an officer in the United States Air Force from 1953 to 1957. He earned his J.D. from University of Washington in 1960. Marvin brings to the firm a wide range of legal experience. He served as an Assistant United States Attorney in the State of Washington from 1960 to 1962. Marvin engaged in private practice from 1962 to 1965. During 1965 to 1966, Marvin served as a District Court Judge in the State of Washington. In 1966, he accepted the position of General Counsel of The Moody Bible Institute of Chicago. He served in that capacity from 1966 to 1996, and again from 2007 to 2009. He is licensed to practice in Illinois and Washington. He is a member of the Chicago Bar Association. Marvin is married to his wife, Sharon. They celebrated their fiftieth wedding anniversary in 2008. They have five children, Marvin, Carl, Eric, Amy, and Melissa, and ten grandchildren.”

(This is a cache because the law firm is now hiding it’s training Loyola University, as well as Notre Dame and DePaul University)

Other web-links that are still up:

And here is evidence of Notre Dame and DePaul University being secretive Jesuit schools. Remember, most Jesuits will not reveal themselves Jesuit based on their blood oath. The few who do make known their Jesuit allegiance have the clearance from the Vatican to admit their Jesuit status as well as an agenda for doing so.

Sadly and shockingly, Moody and Loyola of Chicago pass students back and forth – something the top leadership knows is wrong, but many others might not yet know.

“… High-Intermediate and Advanced students were able to visit Moody Bible Institute and visit 2 speech courses. They had a chance to listen to lectures given by college students on the topic of conflict resolution, participate in communicative activities with native speakers, and have lunch with the Moody students. It was a great, fun and inspiring time for both our students and the Moody Students…”

One other example (one of many hidden connections between Moody and Loyola of Chicago):

One featured Moody student profile notes that a lady named Suchitha Goneh is working toward getting her MA in Bible Study at Moody Theological Seminary, after having just gotten her Doctorate of Juridical Sciences (SJD) with honors from Loyola University of Chicago. And the second link is a lady who is on staff at Loyola after getting her Masters of Divinity (MDiv) at MBI.

In conclusion on the Jesuit concerns at MBI, these cannot be ignored and it appears to us (and others) that the Jesuits are deceiving with their lips while working secretly and swiftly to shut down Moody or buy them up and change them. That is something we are praying and speaking up to stop. Please join us. Thank you.

Another key concern is the network of Jesuits seemingly running many things at Moody (Memorial) Church. Here are a few examples.

Got an MA in Philosophy from Loyola University of Chicago, and then started toward his Doctorate of Philosophy, but strangely didn’t fully complete it.

> Ed Stetzer (close partner with high-level masons and high-level Jesuits). He is not a no-name, but has partnered with the top level of NWO-led leadership that currently controls the Christian industries right now. Examples? Billy Graham – long-known 33rd mason and agent for the Vatican since the mid-1940s.

This ornate edition of “The History of Freemasonry” book has Billy Graham listed in the front cover as a notable mason. 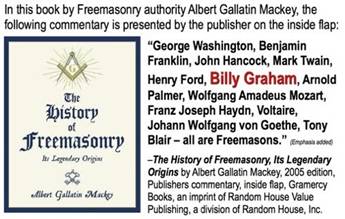 > Billy Graham denies Jesus is the Christ and preaches that there is a “broad” way of grace - https://www.youtube.com/watch?v=4MZWug3QAvs

There is a lot more to say and expose about Mr. Ed Stetzer, and you can find that in this updated expose

In conclusion on Ed Stetzer, Mr. Ed Stetzer is in close partnership with false-teachers (Rick Warren and Joel Hunter at very least, but NAE is full of false teachers), as well as partnered with top-level masons and jesuits. But that’s no surprise, because high-level freemasons run the SBC and have for quite a few years.
> http://www.christianitytoday.com/edstetzer/2017/september/my-visit-to-montreat.html

There are many more concerns about Mr. Stetzer, which you can find here:

We are speaking up to help others join us in praying against it and speaking out against it. Will you join us? Please will you share this info with everyone you know who can help? Thank you.