In case you hadn’t heard, MBI (Moody Bible Institute) has a new president… but that’s not a good thing, at all. You see, the person they brought in is a Jesuit “change agent”. The picture you see in the banner of “agents of change” as well as the satanic boast to “unleash Heaven on Earth” pretending it’s God’s Kingdom – those are both visuals made by Mark Jobe and team. But, that’s just the start of the alarm bells.

Although the top Jesuit leadership at MBI had picked Mark Jobe to be the 10th president of Moody… they kept it low-key with minimal fanfare up until about 1 month before the year’s graduates would be graduating – April 5, 2019. Sadly, most of the alumni and prayer partners of MBI don’t know who Mark is. So, we have written 2 articles (see at the end), and this is our third article on the mystery man who was quietly moved in as the 10th president of Moody Bible Institute. First, let’s look at his public lines about himself, and then look at some of what he’s actually doing – and been doing for 32 years, by his own admission.

“New Life Centers was founded by the New Life Community Church, a multi-site church operating at 20 sites throughout Chicagoland and internationally.   Founded in 1986 as an 18-member church in Chicago’s Back of the Yards neighborhood, New Life (Nueva Vida) still exists under its founding pastor, Pastor Mark Jobe, and now hosts over 34 services weekly.  Together these sites pursue an aggressive growth movement known as the 20-20 vision.  Within this vision are planned 40 new church locations in Chicagoland and 10 new locations internationally.  As an auxiliary partner organization, New Life Centers seeks to equip leaders within each of these New Life communities to serve their neighbors through health, education, and employment services for all ages.”

“Mark is the lead and founding pastor of New Life Community Church in the city of Chicago. He and his wife Dee have seen New Life grow from a handful of people to several thousand meeting at over 20 locations throughout the Chicagoland area with over 40 worship services each weekend and 7 cities internationally. Mark is also the founder of New Life Centers, an organization focused on helping youth in underserved areas of Chicago. He holds a Master’s degree from Moody Theological Seminary and a Doctorate degree from Bakke Graduate University. Mark is the author of UNSTUCK: Out of Your Cave into Your Call and can be heard on his daily radio program Straight Talk. Click on the links below to learn more…

“Mark and Dee Jobe - Senior Pastor - Mark is the Senior and Founding Pastor of New Life Community Church as well as the 10thPresident of the Moody Bible Institute of Chicago. He and his wife Dee have seen New Life grow from a handful of people to several thousand meeting at over twenty five locations with over forty worship services each weekend.

Mark is also the founder of New Life Centers, an organization focused on helping youth in underserved areas of Chicago.

He holds a Masters degree from Moody Theological Seminary and a Doctorate degree from Bakke Graduate University. Mark is the author of "UNSTUCK: Out of Your Cave, and Into Your Call" and can be heard daily on his national radio program called Bold Steps.”

That is the story that he wants you to see. Did you notice that he did admit to being trained in Jesuit Spain (admits it in his stories too), and that he is a graduate of the Jesuit/Lausanne “Bakke Graduate University”? The Jesuits in Lausanne, Switzerland are not low level at all. They are some of the highest levels of Jesuits in the world. So they training would get anyone ready to be a “world-changer”, or as they like to say “change agents”.

So, what is this “Kingdom” that Mark Jobe talks about it? Is it the same one as the Bible talks about? No. Quite the opposite. See, satanists know how to use Christian words with alternative meanings, and unless you are critically analyzing their teachings and comparing tightly with the Bible, you will completely miss it and be fooled by their clever tactics and deceitful wording.  Check out this picture. 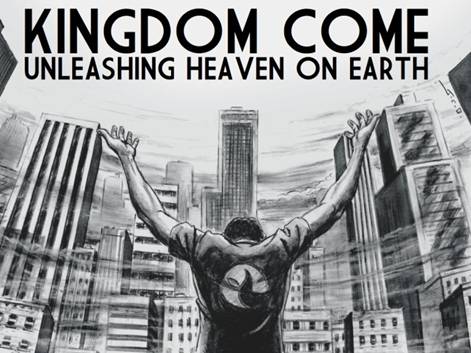 Picture info: That picture is taken from one of Mark Jobe’s blogs and the t-shirt in the picture has Mark’s “New Life Community Church” logo. Mark Jobe is caught red-handed pushing the Vatican/Jesuit one-world-takeover lies for satan, called “7 Mountain Dominionism”. So, when he says “King Jesus”, he’s talking about the “pope” in Rome who pretends to be Christ on earth. Mark is not talking about the Living King of Kings and Lord of Lords, Jesus the Christ - all. And that’s why Mark preaches Jesuit super-hero mythology (you can become a “god”, and/or a “superhero”) and “contemplative prayer”, etc. He’s serving another spirit – not God.

What is “7 Mountain Dominionism”? Good question. It is the religion of all of the so-called “Christian leaders” who say they “believe in Jesus” but their actions don’t agree. That is why the Jesuit “superhero mythology” is so vital for them – they have to get as many people to fall for satan’s original lie that we can become like God, and not have to submit to God.

Who founded it? Jesuit/Lausanne trained Loren Cunningham founder (in Lausanne) of the worldwide “relief” movement called YWAM, and Jesuit-trained Bill Bright, founder of Campus Crusade (now called Cru); and Francis Schaeffer confirmed and partnered with that team, and was one of their major writers. All 3 of them also worked with Jesuit Billy Graham to spread their “new” false gospel that helped people of all nations and religions find the “best light” in their religion that they could (actual quote of Billy Graham). That’s helping all peoples find something else to believe in other than God who created the world and wrote the Bible for us to know who Jesus is and how to be saved.

What are its core teachings? To train up a body of religion-looking people to set up a one-world “dominion” that conquers the seven imaginary/allegorical “mountains”: Media, Government, Education, Economy, Religion, Entertainment and Family. Simply put, if you want to know who ultimately runs things – look at Rome and her Jesuit partners, and all of the so-called world-run organizations, and see who they control and partner with. It’s a huge tangled web of lies, false promises, and ruthless tactics and methods to get and maintain control of the world.

So, how can they all possibly be working together in this? Also a good question. The simple answer is that Rome controls a lot more things than you realize, because they are the mass-murderers of the world, ruling by iron fist, or by trickery and bribes and blackmail, which is why the Jesuits are so dangerous – they are constantly working to sneak in and sabotage everything that is good and holy. And the Jesuits Because they are all trained the same places. The top leadership in this country is run by “advisors” also called “think-tanks”, and they have various names, but the same goal. Some of them sound like teaching schools – “Brookings Institute” or “Cato Institute” or “Earth Institute”. Others look “fundamental Christian” – like the UN change agents at “Heritage Foundation” and “Family Research Council” or the CNP “Council for National Policy”. All of these leaders who are allowed to climb the ranks, have to go through Jesuit training – in one form or another, but trained to not get caught… but God. You see, that’s where their plan to invade and conquer and raise up an army to fight – fails. Jesus gave a promise in Matthew 16: “18 … and on this rock I will build My church, and the gates of Hades shall not [g]prevail against it.” (Matthew 16:18) The church of Jesus the Christ, is called in Greek – the “ekklesia”, which simply means “called out ones”, meaning the pure-living disciples of Jesus who have the Holy Spirit gathering to break bread and read the Bible, learn and grow together in it. You rarely find that in the so-called “churches” that are 501c3 “tax-exempt” corporations with large and/or official buildings and the “state-church” message. But, since the 1980s, you will find lots of people gathering in homes for small Bible studies and/or starting home-churches – just like the precedent that Jesus set in the Book of Acts.

There is a lot more to say about the fake Christian leaders that run this country and the training they go through. If you want to know more, here are some resources. If you need more, just ask. In time, this team (and others) plan to write more articles to help the current generation(s) of modern followers of Christ to catch up on satan’s schemes.

“Billy Graham and His Friends: A Hidden Agenda?” by Cathy Burns (excellent resource on many topics, with thousands of reference notes)

“The Family: The Secret Fundamentalism at the Heart of American Power” by Jeff Sharlet

There is are a lot more concerns to mention, and you can find 4 pages of quick notes and other major concerns about Mark, his activities, and his partners and agendas in the short report we published 2 months ago, and the longer version has much more.

Will you join us in praying against what new and evil Jesuit agendas and changes Mark Jobe and team have for Moody? Thank you.