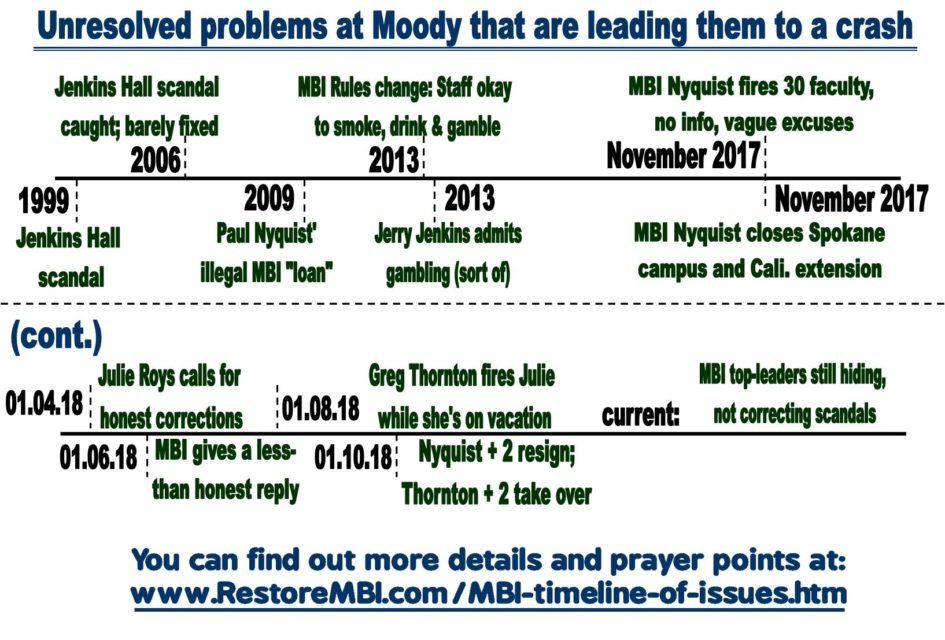 >>> Note – All of these links are actively working right now. If they try to hide this evidence, please email my team, and we can send you a copy of the original. Please save all information you can find and send what you can to alumni, staff, professors, donors and friends of MBI so they can pray. <<<

Hello brothers and sisters in Christ,
Welcome to part 2 of the project and conversation on how we together can work to restore Moody Bible Institute to its roots and foundation. This process is *not* easy, but my team and I believe if we work together, we can help restore Moody, before it crashes. If you missed part 1, you can find that information here:

So, picking up where we left off, I want to next show a timeline of things that I have been able to find in various blogs and discussions, including various news articles. Problems that the top-leadership is so far ignoring – to the extent that they have fired and are firing 30+ employees in the faculty and professors to suppress the truth in unrighteousness. That is what the unsaved do – it should not be named among the honest followers of Christ… but sadly, in many places, this is their wicked normal. Many from all across the country have described this pattern of clergy – in the last 10 to 15 years, and my team has witnessed it a lot, and not just in Orlando.

“16 For I am not ashamed of the gospel of Christ, for it is the power of God to salvation for everyone who believes, for the Jew first and also for the Greek. 17 For in it the righteousness of God is revealed from faith to faith; as it is written, “The just shall live by faith.” 18 For the wrath of God is revealed from heaven against all ungodliness and unrighteousness of men, who suppress the truth in unrighteousness, 19 because what may be known of God is manifest in them, for God has shown it to them. 20 For since the creation of the world His invisible attributes are clearly seen, being understood by the things that are made, even His eternal power and Godhead, so that they are without excuse, 21 because, although they knew God, they did not glorify Him as God, nor were thankful, but became futile in their thoughts, and their foolish hearts were darkened. 22 Professing to be wise, they became fools, 23 and changed the glory of the incorruptible God into an image made like corruptible man–and birds and four-footed animals and creeping things. 24 Therefore God also gave them up to uncleanness, in the lusts of their hearts, to dishonor their bodies among themselves…” (Romans 1:16-24)

> That is how the wicked act… that’s not supposed to be the pattern we see right now of the “leaders” of the righteous followers of Christ who are growing in holiness. This needs to be brought into the light and discussed openly until it’s corrected.

An elder or leader who is doing sins (especially when they are trying to cover them instead of repent) needs to be exposed publicly.
“17 Let the elders who rule well be counted worthy of double honor, especially those who labor in the word and doctrine. 18 For the Scripture says, “You shall not muzzle an ox while it treads out the grain,” and, “The laborer is worthy of his wages.” 19 Do not receive an accusation against an elder except from two or three witnesses. 20 Those who are sinning rebuke in the presence of all, that the rest also may fear.” (1st Timothy 5:17-20)

And Jesus taught this first:
“15 Moreover if your brother sins against you, go and tell him his fault between you and him alone. If he hears you, you have gained your brother. 16 But if he will not hear, take with you one or two more, that ‘by the mouth of two or three witnesses every word may be established.’ 17 And if he refuses to hear them, tell it to the church. But if he refuses even to hear the church, let him be to you like a heathen and a tax collector. 18 Assuredly, I say to you, whatever you bind on earth will be bound in heaven, and whatever you loose on earth will be loosed in Heaven. 19 Again I say to you that if two of you agree on earth concerning anything that they ask, it will be done for them by My Father in Heaven. 20 For where two or three are gathered together in My name, I am there in the midst of them.” (Matthew 18:15-20)

As you can see here in Jesus’ words, the context is within the church body, and includes the church leadership. Moody is indeed in the scope of the passage, and their leaders need to be handled that way. Mrs. Julie Roys and Mr. Richard Weber are just 2 among quite a few who have done the first step – they went to them directly. We now need people to join them, and do the second step “two or three witnesses”. If the leaders do not listen at that point, we need to remove them. As I have said before and say often, it’s going to take a team. What my team and I would like to see personally, is for witnesses to be working together to hold these leaders accountable, and as they do, others would still be getting information out (as appropriate) to the faculty, students, and alumni so they too can be a part of the accountability process too. These leaders have already shown a pattern of bury information instead of correct and repent. So, be direct. Record what they say. Publish it so others can hold them accountable too. The top-leaders are trying to hide conversations – we need them quoted so tough action can be taken by the honest followers of Christ so things can become right in God’s sight and so that God can bless Moody again.

It is on that note that I would like to look at issues that need to be address by the Moody body, including the trustees, the staff, the alumni, the students, and the alumni and donors, issues the top-leadership is trying to cover up, instead of correct.

If you do not know how to help with the accountability conversations, at very least please pray for consequences to catch up to these crooked top-leaders and that they get fired by the Moody alumni and staff, and that the honest ones who were fired wrongly get re-hired, as they are willing. All of us need to pray this way.

“3 For though we walk in the flesh, we do not war according to the flesh. 4 For the weapons of our warfare are not carnal but mighty in God for pulling down strongholds, 5 casting down arguments and every high thing that exalts itself against the knowledge of God, bringing every thought into captivity to the obedience of Christ, 6 and [God is] being ready to punish all disobedience when your obedience is fulfilled [complete].” (2nd Corinthians 10:3-6)

So let’s look at some of the unresolved problems.

* Before 2006
As of 2006, it came to light that Mr. Jerry B. Jenkins had an exclusive suite for him and his family on top of the Jenkin’s Hall. In 1999, Mr. Jenkins had donated an undisclosed amount to help build this building, and also requested the board remodel the top 2 rooms to be a livable suite for him and his family to use on occasion. The key issue was that he and his family had exclusive use of it, and used it more as a second home, rather than just a “when we’re in town” as he had originally said and was agreed upon (details of which are still questionable). When enough pressure spoke up in concern, he finally had to give up exclusive use of it… but many questions are left unanswered. What all happened in that suite that only Mr. Jenkins and his family and a two to three maintenance people had access to, above one of the teaching halls? With the level of corruption involved here, there are serious concerns here for anyone in youth and college ministry background. Serious issues. Was there sexual misconduct going on? Was there sexual sins going on? Who all was involved? We need a thorough investigation of this one for sure. Maybe the professors who teach on abuse at the Chicago campus can conduct an investigation. If not them, then someone needs to. Sins don’t just harm a few – they harm many. And some sins harm deeper. And sins covered allow abuse to continue – if/when it is going on.
> http://julieroys.com/moody-bible-institute-facing-unprecedented-crisis-please-pray/
> http://julieroys.com/luxury-suite-questionable-loans-officers-gambling-shocking-truth-leadership-mbi/
> http://articles.chicagotribune.com/2006-08-28/news/0608280093_1_senior-tenants-affordable-housing-state-housing

* In 2009
Mr. Paul Nyquist (then president of MBI, who resigned early January 2018), obtained a $500,000 “loan” from Moody to start payments on a 1.8 million dollar condo. In the years following, there was no proof that Mr. Nyquist attempted to repay the loan, but he did get a pay-increase in the years following.
> http://julieroys.com/luxury-suite-questionable-loans-officers-gambling-shocking-truth-leadership-mbi/
> https://www.christianitytoday.com/news/2018/january/moody-bible-president-paul-nyquist-resigns-julie-roys-fired.html

A reminder, Mr. Nyquist’s unethical “borrowing” of money is not only illegal, but also cost Moody Bible Institute (MBI). MBI years later (2017), had to close their Spokane, WA campus as well as their extension campus in Pasadena, CA.
> http://www.christianitytoday.com/news/2017/november/moody-bible-spokane-extension-campus-fuller-seminary-online.html

* August 2013
Under Mr. Nyquist, Mr. Jenkins and Mr. Lutzer, and the top-leadership changed the rules for the MBI staff that they could now engage in alcohol and tobacco. The ban was finally lifted. Mr. Greg Thornton told Mrs. Julie Roys that the gambling ban had not been lifted, as per request of her and others. Mrs. Roys investigated and found Mr. Thornton’s words to be dishonest – the top-leadership had snuck the change through without informing anyone outside their little circle.
> https://religionnews.com/2013/09/19/moody-bible-institute-drops-alcohol-tobacco-ban-employees/#
> http://www.christianitytoday.com/news/2013/september/moody-bible-institute-drops-employee-alcohol-tobacco-ban.html

A Luxury Suite, Questionable Loan to Officer, & Gambling: The Disturbing Truth About Leadership at MBI

Adding to this, Mr. Jerry B. Jenkins is indeed the world-renowned author with some very troubling anti-Biblical teaching in the popular book series that he co-authored with the now deceased Tim Lahaye, that is “The Left Behind” series. One key false-teaching in the “Left Behind” series is that some people can take the mark of the beast and still be saved, a false teaching that violates 4 passages in the Book of Revelation, including the words of an angel, including Revelation 14:9-11, Revelation 16:2, Revelation 19:20-21, Revelation 20:4. Additionally, Mr. Jenkins has been caught gambling and then deceiving to cover it and downplay it. Despite getting caught, Mr. Jenkins was still able to retain his position as chairman of the board of trustees for MBI, until 2015. From what we can tell, and as witnesses in MBI have said, so far no proper correction action has yet been taken concerning Mr. Jenkins.
> https://world.wng.org/2013/10/not_bluffing
> http://thewartburgwatch.com/2013/10/19/world-magazine-jerry-jenkins-reportedly-a-gambling-buddy-of-james-macdonald/comment-page-1/
> https://churchleaders.com/pastors/pastor-articles/170960-are-evangelical-attitudes-softening-toward-gambling.html

A reminder, this issue is not yet resolved, but Mr. Greg Thornton (the man who orchestrated for Mrs. Julie Roys to be wrongfully fired) is now acting president of MBI. Yes, as you can see, the top-leadership is trying to cover up sins, instead of leading the guilty parties to confess and walk in repentance and holiness. To get to that stage, it’s clearly going to take a team. Let’s work on getting this resolved properly and Biblically…