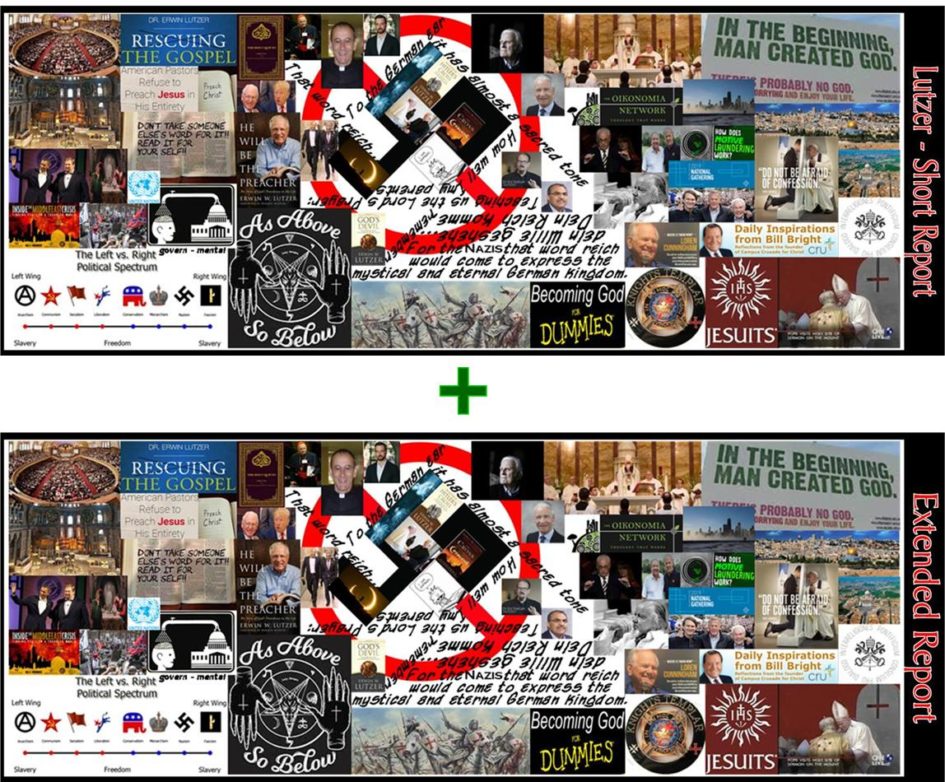 Lutzer Report (Short and Extended)
“Now the Spirit expressly says that in latter times some will depart from the faith, giving heed to deceiving spirits and doctrines of demons, speaking lies in hypocrisy, having their own conscience seared with a hot iron, forbidding to marry…” (1 Timothy 4:1-3a)

“…That is an #exact #description of #Catholic #Jesuit #priests and teachers… #Lutzer is a protégé of Billy #Graham and both are Jesuit Doctors of Catholic Law. Billy Graham was an evil ecumenical leader to bring the “Protestant” churches under the Pope. We know why the Billy Graham library would be selling Erwin Lutzer’s The Cross in the Shadow of the Crescent. Lutzer is a protégé of Billy Graham and both are Jesuit Doctors of Catholic Law. But why would Friends of Israel be selling Lutzer’s book Hitler’s Cross? We thought Ralph Gower’s (recommended by John MacArthur of Grace To You) anti-Israel propaganda was bad which is why we wrote a report on it; but Lutzer’s anti-Israel propaganda is far worse. Why are our Christian Israeli brothers and sisters or Messianic believers not writing this indictment against a Nazi in our midst? They know Israeli history and struggles for survival better than we do, presumably. Are they all infiltrated by closet satanists who stifle human responses to known needs of their brothers of Israel? Is that why they have not responded? How can we help Christian ministries stop supporting Nazis and Jesuits who are leading much of the leadership partnerships between Israel and America right now? How can we stop a Jesuit-led war against our Muslim neighbors in America turning our land into a death zone and detention center for Christians and Israelis and those Muslims who are interested in Christianity and are uncooperative with the Jesuit partnership between the extremists of Islam, Kabbalah, and Catholicism? How can we stop the Jesuit war-machine that wants to make a Middle East Holocaust/Armageddon right now (before the rapture and before the Tribulation in attempt to discredit God’s foreknowledge) by generating hostility against rogue states who have not yet submitted to the international monetary (murder) fund program? This is one way to how you do it – you write point-by-point reports on the bad fruit of a well-known bad tree who is creating the “moral necessity” motives for war….