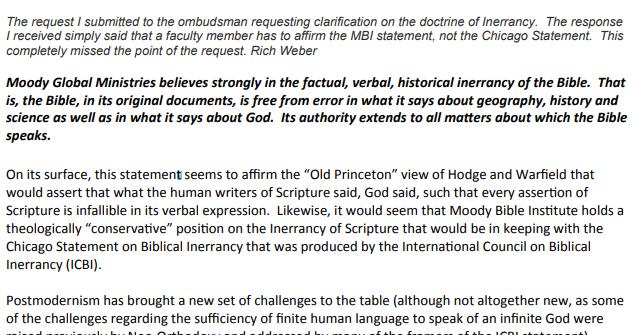 The last we heard, Mr. Weber is being fired for speaking up. He needs your help to help him keep his job *and* to hold the corrupt leadership accountable to see through the solving of the problems being discussed. Thank you for your help! ~ The FEDBP/INCPU teams and the “RestoreMBI” team

The request I submitted to the ombudsman requesting clarification on the doctrine of Inerrancy. The response
I received simply said that a faculty member has to affirm the MBI statement, not the Chicago Statement. This
completely missed the point of the request. Rich Weber

Moody Global Ministries believes strongly in the factual, verbal, historical inerrancy of the Bible. That
is, the Bible, in its original documents, is free from error in what it says about geography, history and
science as well as in what it says about God. Its authority extends to all ma?ers about which the Bible
speaks.

On its surface, this statement seems to affirm the “Old Princeton” view of Hodge and Warfield that
would assert that what the human writers of Scripture said, God said, such that every asserAon of
Scripture is infallible in its verbal expression. Likewise, it would seem that Moody Bible InsAtute holds a
theologically “conservaAve” posiAon on the Inerrancy of Scripture that would be in keeping with the
Chicago Statement on Biblical Inerrancy that was produced by the InternaAonal Council on Biblical
Inerrancy (ICBI).

Postmodernism has brought a new set of challenges to the table (although not altogether new, as some
of the challenges regarding the sufficiency of finite human language to speak of an infinite God were
raised previously by Neo-Orthodoxy and addressed by many of the framers of the ICBI statement).
Among these challenges are debates about whether the ICBI Chicago Statement is sufficient to define
“Inerrancy,” and whether or not “truth” is to be understood as “that which corresponds with reality.”
These two issues – Inerrancy and Truth – are inseparable. The ICBI Chicago Statement on Inerrancy is
rooted in a recogniAon of “truth” as being “that which corresponds with reality” (i.e., a “correspondence
view” of truth). The official commentary written to accompany the statement states…