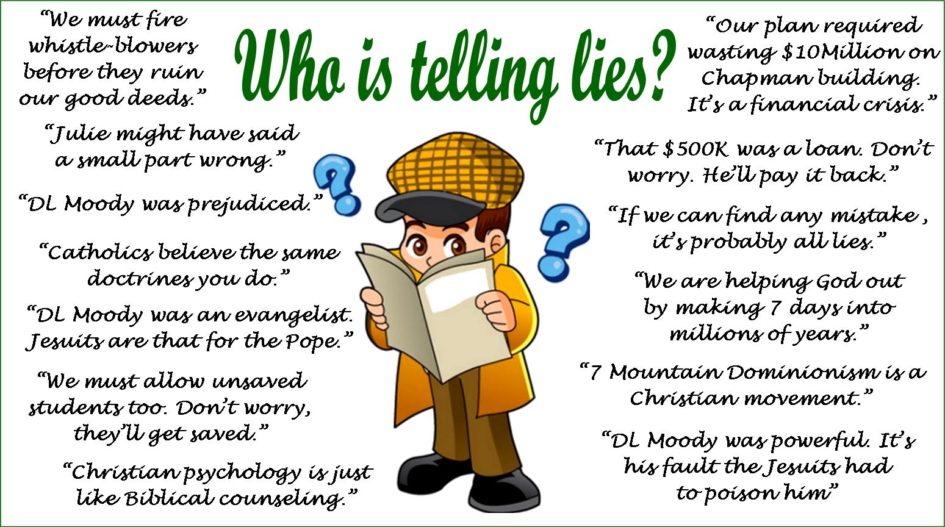 You need to know the top leaders at MBI are clever manipulators (board of trustees, Jesuits, psychologists, etc). When anyone points out their evil deeds, they deny it or, even worse, they falsely accuse the whistle blower. Then they secretly change the biggest things they got caught doing, so no one can prove their evil deeds. Sadly, some of college age students won’t research the facts, instead they fall for clever believable-lies and manipulations, including flattery. We believe a quick review of the short history of how MBI got in its current situation would be most helpful in showing who is lying.

There have been several whistle blowers who knew what they were talking about. They were eye-witnesses, and they did a good job of exposing evil. But the top leaders quickly criticized a slight error, and then slandered the whistle blower, and dismissed all of their evidence – telling the students to ignore everything. But why do they dismiss all of the evidence that proves evil deeds? Because they almost get caught each time. Then a carefully-planned spiritual deception covers everything like a thick fog, and the worst misdeeds are changed or excused, and the game goes on as planned. And, when a Jesuit professor, or psychologist starts getting caught they go away and another takes their place. Have you forgotten that Julie was quoting actual major legal and moral issues that need to be addressed by the Moody family – students, alumni, donors, and prayer partners? Have you forgotten that Rich Weber was raising important questions and noting that some of the MBI staff was/is not keeping their oath to God and MBI about taking God’s Word literally and in-context? Have you forgotten that small group of students…